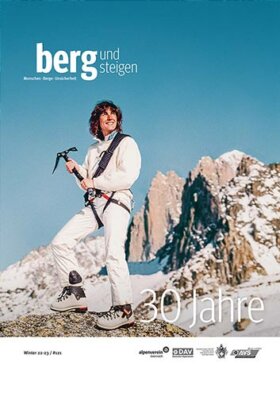 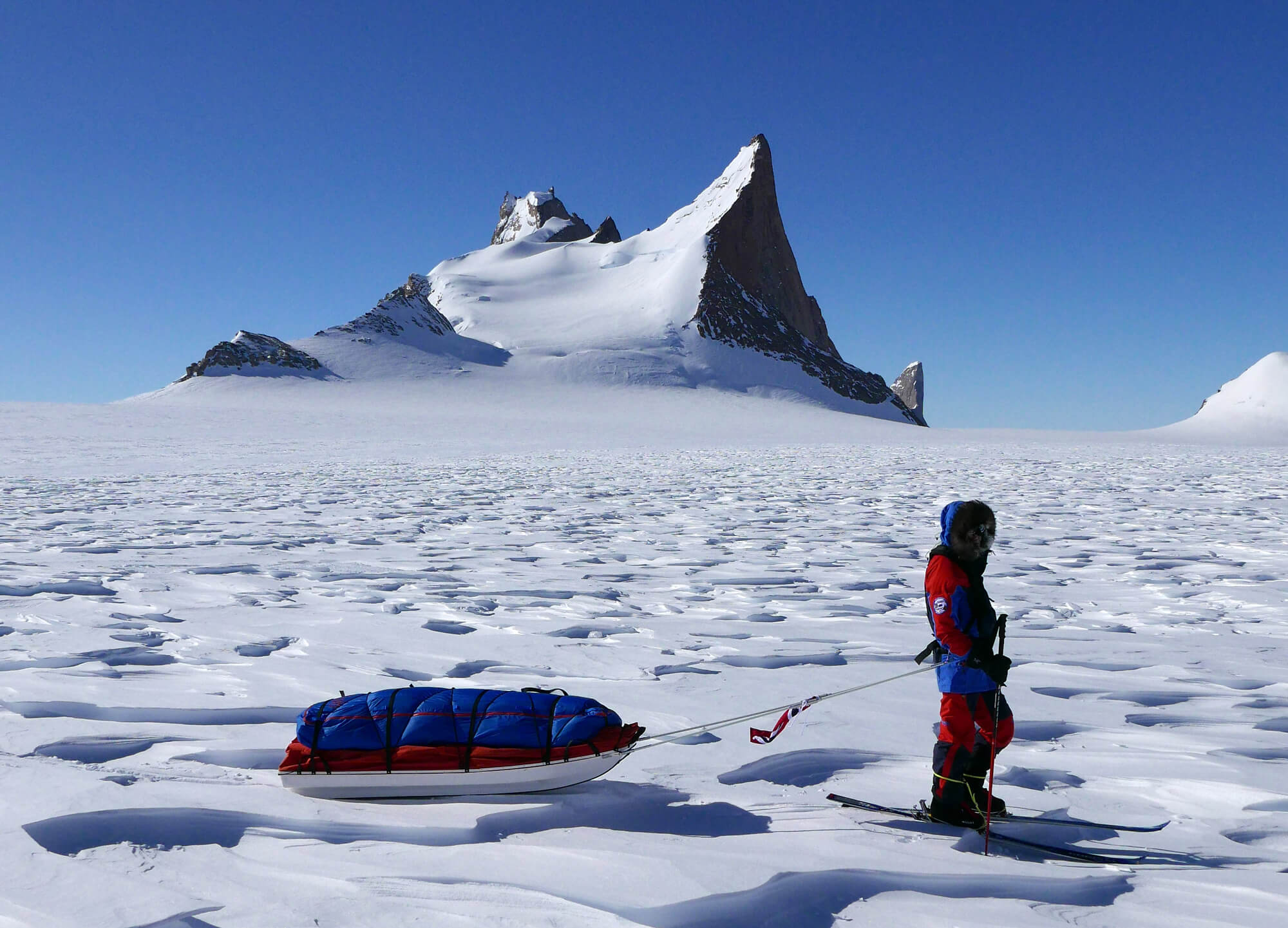 The development of modern Antarctic expeditions and an attempt to classify ice travel. Part 1.
While there have long been recognised classification systems in alpinism, climbing, sailing, paragliding and canoeing, the categorising of polar journeys has been ad hoc and inconsistent. A new classification model provides long-awaited guidelines to those wanting to immortalise their journeys at the ends of the earth. Christoph Höbenreich. Google translated from German to English, edited by Eric Philips Photo 1 In the Filchner Mountains, Queen Maud Land, East Antarctica (also known as Neuschwabenland) hard knife-edged sastrugi created by strong wind make travel difficult. Photo: Christoph Höbenreich 2015

Historically, polar exploration was driven by the discovery of new land and claiming priority for king and country. These nationalistic interests have now given way to personalised experiences and sporting challenges and it’s impossible to compare today’s expeditions with those of the pioneers and early explorers. Modern equipment, satellite navigation, compact communication devices together with established supply and rescue options render the heroics of yesteryear as a bygone era. In the context of our high-tech world we may ask the question: What is still a pioneering achievement? Something never attempted? A risky adventure at the edge of the impossible? An extreme sporting challenge? And which among them are mock adventures? Quantifying the sporting excellence of modern polar athletes and developing an inclusive classification system is a challenge, especially since objectives, types of support and above all, locomotion disciplines, are very different. Despite, or perhaps because of, the growing number of polar travellers and the high level of interest from media and sponsors, the lack of an established classification system for polar expeditions fosters an environment of embellishment and misrepresentation, upholding the motto ‚more appearance than reality‘. The oft used marketing ploy of attempting a ‚world record‘ often falls well short of the mark, both in theory and in practice, with the uninformed simultaneously captivated and hoodwinked by this often baseless term. The unique flair of a polar expedition is most often not found in records, times or distances, instead hidden in an emotional dimension. Yet for record seekers with an unrealistic no-limits mentality, such elegance appears as a romantic dream. Pushing the limits and striving for records is all too human and as a result, modern polar expeditions are often competitive. And so, in a field where claims of fastest, longest, most extreme or most extraordinary are becoming prevalent, there has been a call for an objective system that compares apples with apples, skiers with skiers. The polar wilderness provides a pole scope and opportunity for anyone to live out their dreams (provided they comply with the relevant laws and regulatory requirements), regardless of whether they are low-key activities, top athletic performances or discoveries into unknown territory. But as soon as one goes public or aims for measurable records, their activity stands to be compared with others. This requires uniform standards and terminology. While variations in distance covered are still relatively easy to understand, ethics and styles of polar expeditions (as in top alpinism) can lead to nuance that can only be assessed by knowledgeable insiders. The general public, on the other hand, can rarely differentiate the subtle but often decisive differences. And if half-truths or the concealment of facts replace precision, the differentiation between reported and actual performance is lost and comparisons become absurd, particularly at the elite end of achievement in polar wilderness. The polar regions are the most remote playgrounds available to extreme adventurers. They are not only geographically at the ‚ends‘ of the earth, but also somewhat obscure in the public’s consciousness. In the golden age of discovery adventurers had been the driving force behind expanding our geographic knowledge. Their exciting exploits continue to influence our ideas about Antarctica. And yet an ilk of modern-day polar traveller can be infuriatingly indifferent to the realities of their surroundings, where passengers on luxury cruises to the Antarctic Peninsula consider themselves to be on a ‚South Pole Expedition‘ (most don’t even cross the Antarctic Circle) and wonder why all the penguins haven’t been eaten by polar bears? Polar athletes themselves are often to blame for the collective misunderstanding, time and again their own expedition reporting, whether consciously or otherwise, is laced with ambiguity, often deliberately so. While the acceptance or denial of food caches or supply flights during expeditions may be reported, the ‚explorers‘ – as adventurers often call themselves – skilfully suppress that they were led by professional guides, as if that somehow reduces the difficulty and value of their performance. How can the historical achievements of Will Steger, Reinhold Messner, Børge Ousland, Rune Gjeldnes or many other top pioneers be truly understood when abbreviated treks, vehicle-supported trips or even tourist activities are presented as ‚the last great adventure of mankind‘, where a novice polar skier can follow a graded and flagged track on a ‚record-breaking’ expedition? The value of an expedition or its importance to society is a valid topic for debate. However to realistically evaluate and compare developments and differences in polar expeditions, a basic understanding of geographical facts and historical backgrounds, supported by truthful and serious reporting of actual performance, is required and this can only be achieved by using a standardised vocabulary. The maxim of the UIAA Tirol Declaration,1 which was written for mountain sports in the 2002 International Year of Mountains in Innsbruck, Austria, can also be applied to polar expeditions. It states, Climbers should take pains to report their activities realistically. An accurate account enhances not only the credibility of the climber, but also the public reputation of his/her sport. This applies equally to polar athletes.

In early 2006 the Austrian Wolfgang Melchior,2 after skiing 893 kilometres over 33-days as a participant in a guided group, announced, ‘World record at the South Pole‘. The then 50-year-old planned ‚to be the first person to march to the South Pole in just 40 days without technical aids‘. The record, however, was not a stronger ski performance than previous pole skiers, but simply a significantly shorter route, as the guiding company chose to start their expedition from a point3 much closer to the pole than previously used. But you don’t break the 100 meter sprint by running 80 meters. None in Melchior’s team felt the need to call their shorter variation to the South Pole a ‚world record‘. And the press release, announcing the first Austrian to have reached the South Pole ‚without outside help and only with self-pulled sledges‘, is pure fabrication as, struggling with progress and jeopardising the success of the expedition, a fair swag of Melchior’s equipment was distributed among others in his team (as the Norwegian Cecile Skog wrote in her expedition report).4 She herself took 25 kg from the Austrian. Yet Melchior received the State Prize for Communication and Public Relations. By contrast, in 2008 the Norwegian Christian Eide led a team to the South Pole in just 24 days on the same route. 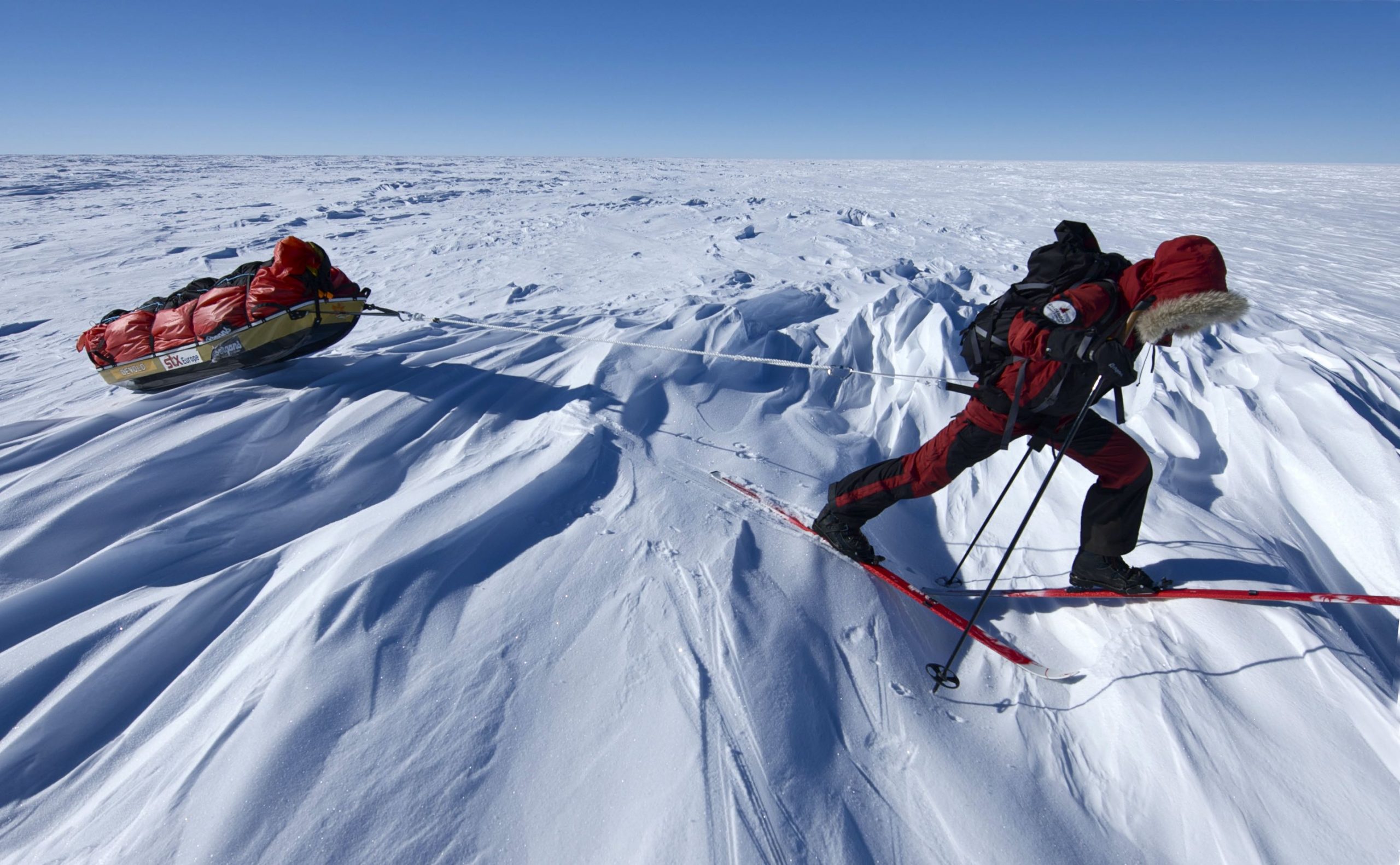 Photo 2 After her test expedition in 2005, Norwegian woman Cecilie Skog in 2009-10 battles with her polar sled, which initially weighed 135 kilograms, across the southern polar plateau on the first ski crossing of the Antarctic landmass without the use of kites. Photo: Ryan Waters 2010 At the turn of 2010-11, the 400 kilometres Race to the South Pole‘ between Austrian and German ski teams, with former alpine ski champion Hermann Maier and TV-presenter Markus Lanz as prominent participants, wanted to reconstruct the ‚last great adventure of humanity‘5 in front of TV cameras, paying homage to the legendary race between the Roald Amundsen’s Norwegian team and the Brits led by Robert Falcon Scott century earlier. The south polar plateau remains a forbidding place and the athletes required a certain skills level but to compare the project to that of their historical forebears is ludicrous and the race was by and large not taken seriously. To reach the South Pole in 1911-12 the successful Norwegians and the tragically failed Britons had to cover the almost seven-fold 2700 kilometres distance from the Ross Sea to the South Pole and back, over little-known terrain and without vehicle escort, satellite connection to the outside world and evacuation insurance. Amundsen and Scott would roll over in their graves had they learnt that the centenary of their great journeys would be memorialised by a staged sporting event? In 2015 German Martin Szwed claimed to have reached the South Pole solo in a time of just 14 days and 18 hours – almost ten days faster than Christian Eide’s6 South Pole speed record on the classic 1130 kilometre route from Hercules Inlet set four years earlier. In search of recognition, Szwed weaved a tangle of lies and deceptions,7 never coming close to the South Pole. In 2018, after skiing 1455 kilometres in 54 days, 33-year-old American Colin O’Brady announced he had become the first person to realise a ‚Solo Unassisted Unsupported Crossing of Antarctica‘, a performance that he alone thought to be previously ‚impossible‘8. Even the reputable New York Times erroneously described the expedition as one of the most remarkable achievements in polar history. This caused frenzied discussions in the professional world. Finally, the renowned magazine National Geographic9 investigated the story: O’Brady had started and ended his expedition on the inner continental edges of the Ronne-Filchner and Ross Ice Shelfs and followed the South Pole Overland Traverse Route (also known as the McMurdo-South Pole Highway), a compacted and flagged road constructed in 2006 by the US Antarctic Program to supply their Amundsen-Scott South Pole Station (Photo 3). Annually maintained by traverse staff driving vehicle trains towing heavy fuel and supply sledges, storm-furrowed fields (Sastrugi, Photo 1) are levelled and crevasses filled with snow, making travel by ski or pedal drive much easier and safer. 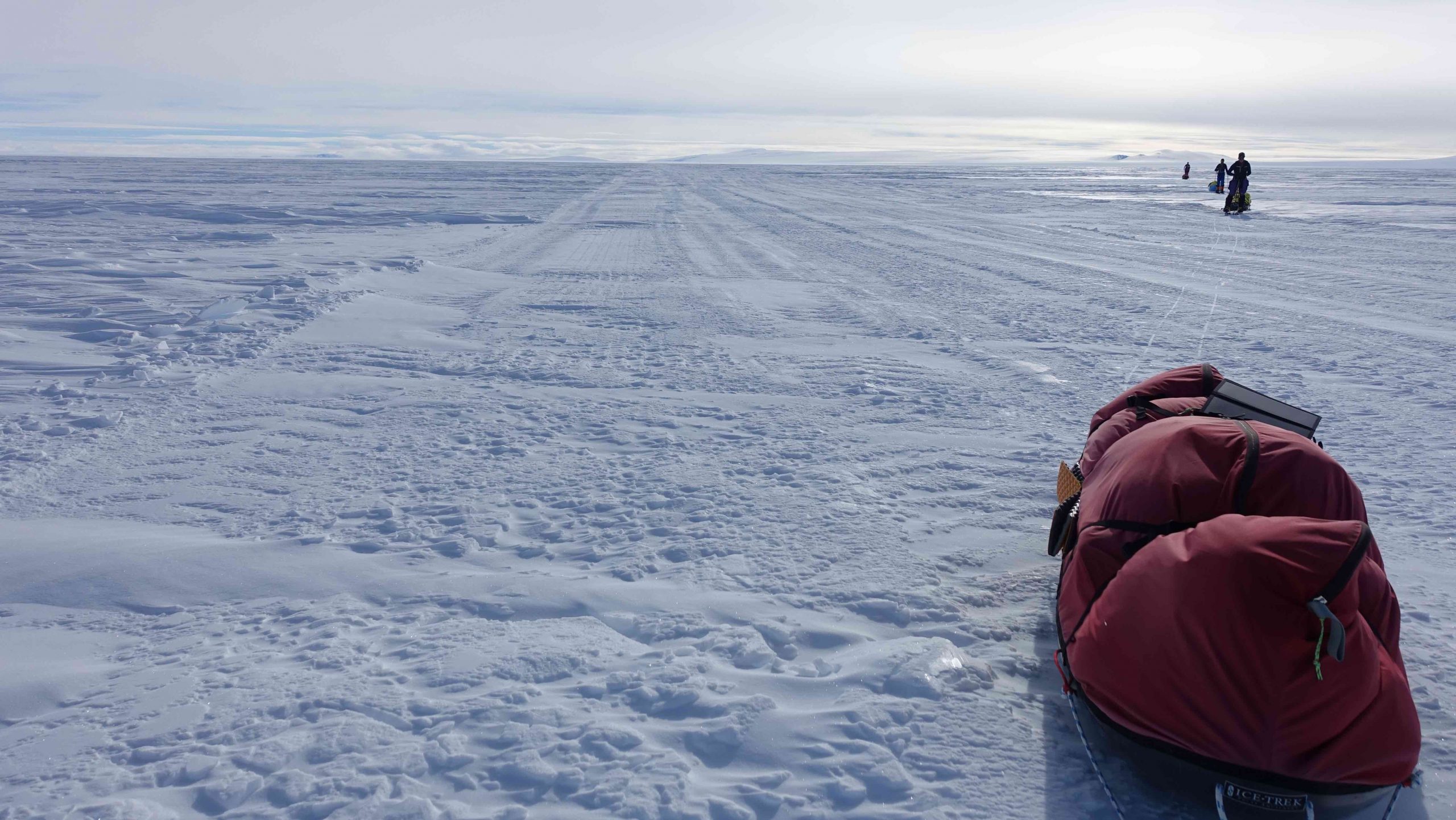 Photo 3 Used to resupply the US Amundsen-Scott South Pole Station, the 1600-kilometre ‚South Pole Overland Traverse‘ ice road (SPoT, also called McMurdo-South Pole Highway) was completed in 2006. It extends from McMurdo Station over the Ross Ice Shelf and through the Transantarctic Mountains via the Leverett Glacier to the South Pole. The route is graded and flagged by teams driving heavy tractor trains making unmotorised travel and navigation easier. Photo: Eric Philips 2017 Such performances are incomparable to that of the then 34-year-old Børge Ousland10 who in 1997 became the first person to cross Antarctica solo. On skis, sled in tow and using a simple kite to harness the wind, Ousland travelled from the north end of Berkner Island embedded in the Ronne-Filchner Ice Shelf to the South Pole and onward through the Transantarctic Mountains via the rugged Axel Heiberg Glacier, crossing the Ross Ice Shelf and ending at the US scientific settlement of Mc Murdo Station on the opposite seaward coastline. The Norwegian explorer covered 2845 kilometres of untracked terrain in a mere 64 days compared to O’Brady’s 1455 kilometres in 54 days. CIRCUS ANTARCTICA –  Part 2 CIRCUS ANTARCTICA –  Teil 3 Tirol Deklaration Der Standard, 01/10/2006  The start at 82°20’S, 65°00’W is a good and popular starting point today and is also known as the „Messner Start“. Cecile Skog: Den Himmel berühren. Mein Weg auf die höchsten Gipfel und an die Pole. München, 2009, S. 91 APA 11/28/2013 GWR Der Spiegel, 02/28/2015 Colin O’Brady: The Impossible First. New York, 2020 National Geographic, 03/02/2020 Børge Ousland: Alone Across Antarctica. Oslo, 1997 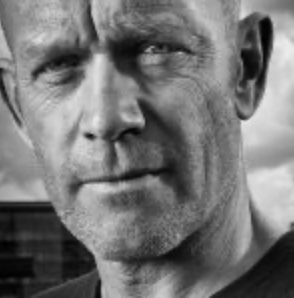